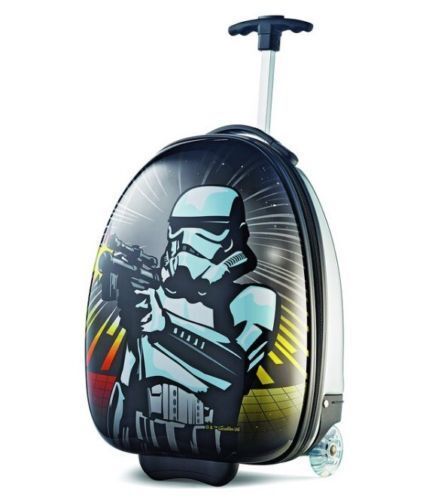 Whether you travel once a year or twice a week, you need luggage. American Tourister offers carry-on and full-size bags. These suitcases are available in a variety of models and colors such as black, white, and most colors of the rainbow.

American Tourister makes hard-sided and soft-sided luggage. There are some different factors you may want to consider depending on your needs.

Soft-sided suitcases are made of canvas, nylon, or another flexible material. Many large soft-sided suitcases weigh only about 9 pounds. They can often expand up to 3 inches when extra storage is needed. Some have between two and four wheels.

Hard-sided suitcases are often made of polypropylene materials. They can weigh up to 11 pounds. Many expand only about 1.5 inches when needed. Like soft-sided options, some have between two and four wheels.

What is a spinner?

Spinners are suitcases that stand upright on four wheels. Most offerings from American Tourister have specialized wheels that are manufactured to allow the wheel to turn a complete 360-degree circle, allowing for easy maneuverability of the suitcase.

How big are American Tourister carry-ons?

American Tourister makes carry-ons with bodies that are from 20 to 21 inches long. They are often 14 inches wide and up to 10 inches tall when laid flat. Remember that the wheels add about another 2 inches.

How big is a full-size American Tourister suitcase?

You can get matching sets of hard- and soft-sided luggage from American Tourister that include from two to four pieces of luggage. Two-piece sets typically have a large case and a carry-on. Three-piece luggage sets often add a medium case, and four-piece sets usually have a duffel.

American Tourister makes childrens luggage in a variety of styles. Most are 18-inch spinners with cartoon characters on their outside, but upright suitcases are also available.

Content provided for informational purposes only. eBay is not affiliated with or endorsed by American Tourister.