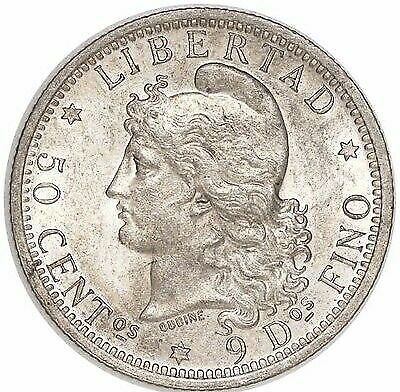 Silver coins from Argentinas early era are known for their historic and artistic value. Fortunately, they are still relatively easy to find, especially on eBay. Although the country didnt receive its independence until 1824, some coins, such as the ones from the United Provinces, were struck before that date. You can find a wide variety of Argentina coins on eBay.

Which Argentina coins were struck during the early 1800s?

Which years were the Argentina 25 centavos and other centavos coins minted?

The Argentina 25 centavos coin was a standard distribution coin that was minted from 1993 to 1996. It features the Cabildo building and has "REPUBLICA ARGENTINA" on the top of the coin and "EN UNION Y LIBERTAD" on the bottom. Made of copper-nickel, it weighs 5.20 grams, is 24.2 millimeters in diameter, and is 1.8 millimeters thick. The words are translated "ARGENTINA REPUBLIC · IN UNION AND FREEDOM." Newly introduced 1, 5, 10, 25, and 50-centavo coins were minted in 1994. In 2001, the final 1-centavo coins were struck.

When were gold and silver pesos used in Argentina?

In 1875, the Argentine gold coin was a gold peso fuerte, a coin equivalent to 1.5 grams of fine gold. In 1991, the government established the peso oro sellado, or the stamped gold peso (1.612 grams) and the silver peso (25 grams). The following coins were created:

Centavos from the 1990s are some common collectible Argentina coins for sale, and complete sets are affordable and easy to find on eBay. Other coins that are older ones, like the silver 1881 Republica Argentina Libertad 50 Centavos, are valuable and rare, even when heavily worn and damaged. The coin, made of 90% silver, was first minted in 1881. Later years are highly collectible but much less expensive.