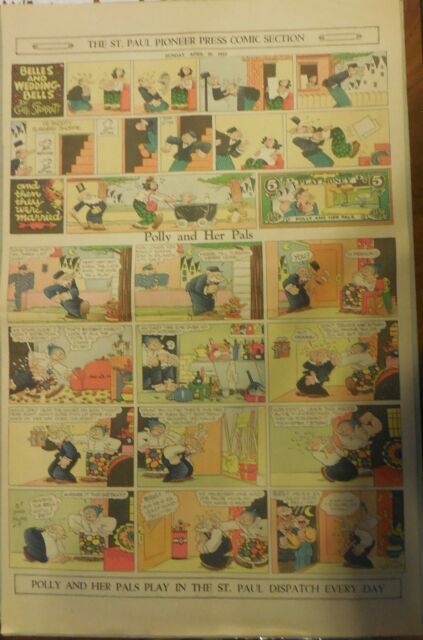 Comics can be humorous, timeless, and universal commentaries on humans and their weaknesses. Comics can also be a reflection of the pop culture and the social, political, and economic realities of various time periods. The collectible comics provide a variety of strips from a wide range of decades.

What was the first comic strip in a newspaper?

The Yellow Kid, created in 1895, is credited as being the first comic strip in a newspaper, but the concept that led to comics developed over centuries. While using humor, The Yellow Kid focused on political and social commentary and was intended for adults. The popularity of comics grew. Many early comics are available among these collectible newspaper strips.

How have newspaper comics changed?

In the 1920s, many strips started creating storylines. These included Popeye, Buck Rogers, and Tarzan. Then, in the 1940s, some strips, such as Mary Worth and Judge Parker, created mini soap operas within the strips. Copies of these and other similar comics are still available.

What has not changed about comic strips?

The comic strip, Blondie, is a good example of a timeless and universal comic strip about the foibles of humankind, or of the foibles of at least one man, Dagwood Bumstead. It has been published in the newspaper each day since 1930 and reaches 47 countries. Not much has changed.

Blondie and Tootsie started a catering business, but generations still enjoy Dagwoods repeated behavior as he deals with his boss, Mr. Dithers. He borrows from his neighbor, Herb. He runs into the mailman, Mr. Beasley, as he rushes off to work in the morning. He naps on the sofa. And, of course, he snacks on his huge Dagwood sandwich.

Copies of Blondie have been enjoyed by generations and have not changed much since their 1930s heyday.

Who are some of the cartoonists behind these comic strips?