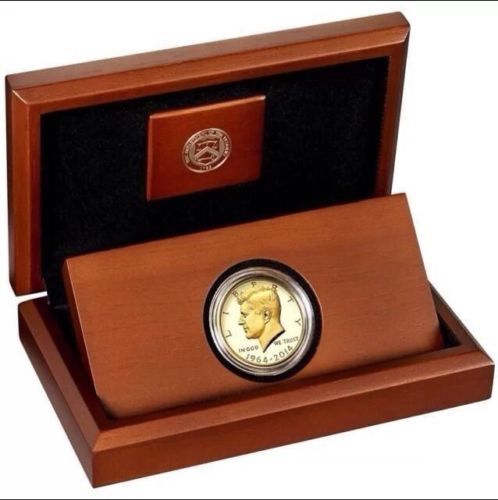 Gold Kennedy half dollars from 1964-now are a special collectors item. The original Kennedy half dollars were minted in 1964 after President John F. Kennedys presidency ended; the coin was designed in memory of the president. The half dollars are well-known, but rarely seen in use due to the value of the coins as a collectible.

What are proof characteristics of a 1964 Kennedy half dollar?

Gold Kennedy half dollars that were minted in 1964 have the distinct profile image of Kennedy upon the face of the coin with the year 1964. The 1964 collector versions of the Kennedy half dollar coins are silver. The back of the coin has the bald eagle with an olive branch and arrows. There is a mint mark proof by the eagles claw holding an olive branch on the 1964 version. The mintmark proof is a good idea to check to verify the authenticity. The proof is different in different versions. The different versions are made of silver or copper with silver surfacing.

What are defining design characteristics of half dollars after 1964?

After 1964, the metal composition of the coins was altered due to fluctuations in the value of different precious metal materials. This resulted in the coins issued after 1964 to be made of silver and copper. The coins minted after 1971 were made of nickel and copper. In 2014, a special commemorative mint golden half dollar was made to commemorate the 50th anniversary of the piece. The gold represents the golden anniversary of the Kennedy coin.

Who came up with the initial design of the piece?

The Kennedy currency were designed with the help of mint sculptors. The mint sculptors Frank Gasparro and Gilroy Roberts old works enabled dies to be made within the next year for the dollars following the end of Kennedys presidency.

Can you get this with or without a signature box?

This item is available with a signature keepsake sleeve, box, or on its own. The keepsake sleeve or box has some added information on the item and history of the former American president of the United States of America. This makes the item even more special and holds more historical value to it.

What minting anomalies exist with these coins?

A minting anomaly is a place where a mint releases a number of coins with a slight variation that occurs, typically during the stamping process. These coins are mentioned in collectors books because of the fact that they are less common than standard minted versions of the same year. Some collectors look specifically for these coin types. Examples include: