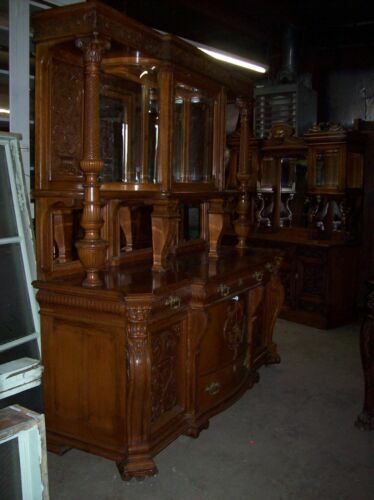 The first sideboards, which were rustic kitchen shelves designed to hold food in Medieval European homes, evolved into pieces of solid wood furniture consisting of a long shelf with a wood top and drawers on each end. They were also called buffets. Early credenzas were sideboards with drawers and cabinets but no legs.

In what era were credenzas first used?

Sideboards, also known as buffets or credenzas, were used in 16th-century homes as storage options and for dining services. By the 1700s, the rustic piece of furniture with drawers took its place of honor in early dining rooms and slowly evolved into its classic design. Oak sideboards were commonly used in colonial America and are still used for a variety of purposes, including as storage for flatware or as display pieces.

What kinds of wood were most often used?

The oldest credenzas with drawers come from European countries, such as France, England, and Scotland, and were often constructed of fine woods and inlaid veneers. Later pieces built in America were often made of oak, but woods, such as pine, mahogany, and walnut were also used. Wood from oak trees was plentiful in the American colonies, making it more attainable than imported woods. In the early 1900s, mail-order sources like Sears and Roebuck made furniture available in rural areas, and oak sideboards became common in both rural homesteads and urban homes.

What sideboard styles were produced and in what years?

Oak cupboards built before the 1800s most likely come in the following styles: French country, Georgian, Hepplewhite, Regency, and Renaissance. Buffets built in the 1800s come in the same styles as earlier ones but are also available in American versions like Victorian, Country, Empire, and Federal. Oak buffets built from 1900 to 1950 encompass previous styles but also include ones like Chippendale, Arts and Crafts, and American Traditional. Oak buffets built from 1950 to the present come in traditional dining styles, in addition to Danish, Mid-Century, Queen Anne, and French Provincial.

What defines a buffet made in the Georgian style?

Buffets made in the Georgian style have distinct characteristics. A long, wood top narrow table with drawers for silverware and cupboards for bottles of liquor and wine, it was also used in dining rooms for serving food. Recessed Georgian sideboards are usually five feet or longer in length, and they always have six legs, two of which are on either side of the center section. Furniture of this period is most often made of mahogany or oak.