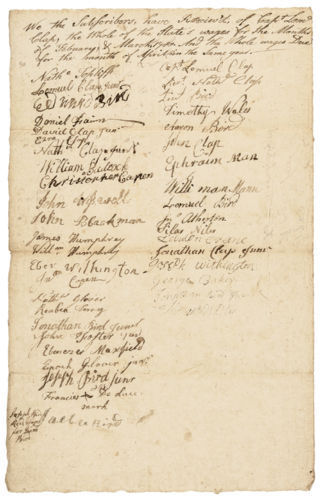 A pivotal event in world history, the American Revolutionary War was fought from 1775 to 1783 and involved the ships and armies of the American colonies, the British Empire, and the Kingdom of France. Collectibles from the period range from household items used in the homes of colonial patriots and loyalists alike to weapons used in battle. Here is some background information on original Revolutionary War period items.

What kind of firearm accessories are available?

Accessories associated with muskets and available as collectible items include:

What kind of artillery was used in the Revolutionary War?

What kind of money was used in the war?

The British and French issued coins and currency. The British monetary unit was the pound. The French monetary unit was the livre. While coins with silver and gold retained their value, paper currency in those denominations was frequently overproduced. Consequently, collectors should be aware that a gold coin and paper currency from the time can have the same face value but may have very different prices.

The American Continental Congress issued paper currency denominated in dollars and often referred to as Continentals. Due to inflation and counterfeiting, the Continental came to have a very low value by the end of the war. Thus Continental notes are not recognized as legal tender. However, depending on condition, they may have a high value based on numismatic interest.

What kind of documents are available?

Patriots and Loyalists in the colonies would promote their political views in books and newspapers, and copies that survived are available as items for collecting. Correspondence was written by quill onto paper, and letters were often saved and passed through generations, especially if they involved historical figures such as George Washington or referenced significant events, such as the battles of Yorktown and Lexington.

Here are some of the document types that date from this time: