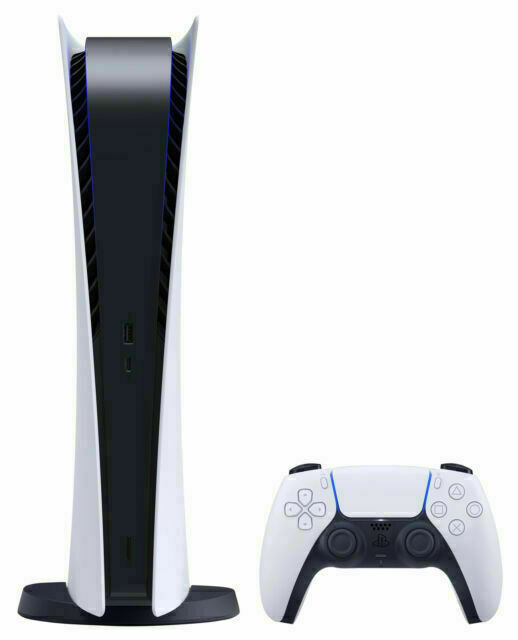 For many gamers, it has been a long seven-year wait between the release of the PS4 and PS5. While the PS4 Pro model was a popular stopgap that offered 4K resolution and several other upgrades, many were clamoring for a true next-generation console from Sony. That's why the PS5 news of a new release, just in time for the 2020 holidays, garnered much attention.

The PS5 Digital Edition's key specs are as follows:

The PS5 Digital Edition has a black base and body with a white wraparound cover. There are hints of blue in the PlayStation logo and in the lights that show the console is on and operating.

As part of the PS5 design, you get a base stand that lets you orient the console either horizontally or vertically. Unlike the standard version, the Digital Edition does not have an HD Blu-ray drive integrated into the top cover. Eliminating the drive results in a design that is slightly thinner and has a more streamlined look.

Both the standard PS5 and Digital Edition use a specialized version of AMD's third-generation Ryzen CPUs. These chips feature eight processing cores with 16 threads for hyperthreaded processing. The processor can achieve a maximum speed of 3.5 GHz on each core.

The systems also feature AMD’s advanced Radeon graphics cards with the latest RDNA 2 engines for advanced graphics generation. This technology features accelerated ray tracing and speeds up to 2.23 GHz to rapidly render realistic visuals in 4K or 8K depending upon your screen’s max resolution.

Beyond the physical Blu-ray drive, or lack thereof in the Digital Edition, the other differences are rather minor. They include:

Content provided for informational purposes only. eBay is not affiliated with or endorsed by Sony.